Sound EffeXXX is the seventh episode of Season Two of Impractical Jokers and the twenty-fourth episode overall. It aired December 20, 2012 and it had a total of 1.56 million U.S. viewers.

The guys reveal strange devices to focus groups, attempt to use people as pillows in a park, and try to persuade grocery shoppers not to purchase their wanted items. Then, the loser gets steam blown at him while playing steamy sounds at a coffee shop.

Goal: Get the most people to say they would buy your product.
Loser: Sal and Murr got no votes and lost by default.

The jokers need to present inventions and attempt to get votes

Goal: Sleep on a stranger for as long as possible.
Loser: Joe lost with only 12 seconds.

The guys have to sleep on strangers' shoulders for as long as possible. Shortest time loses.

You Don't Want That

Goal: Convince a stranger not to buy a product.
Loser: Sal couldn't convince a lady not to buy a noodle brand is because of hot ham water. He gave up and told her to "just get it" anyway.

The guys are in a grocery store must convince others not to buy something. If they aren't convinced, the joker loses.

Loser: Sal
Punishment: As punishment, the loser Sal had to go in a coffee shop and get a laptop while the other guys added inappropriate sound effects like he was watching a pornography film, even though he really wasn't. An employee turned off the speakers saying Sal can't do that in public. Then Q forced him to turn it back on after the employee left. 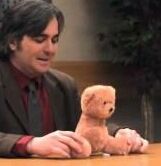